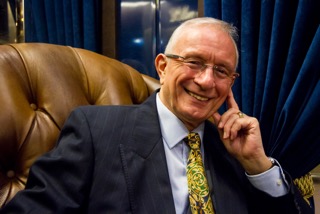 Eric Watson was born in Cardiff in Wales, but was brought up mostly in the city of Middlesbrough in North East Yorkshire. He started his musical training on the humble recorder but soon took up piano and violin, joined the Middlesbrough Junior Orchestra, and also began to perform professionally as an accompanist while still in his teens. This led eventually to full time studies at Trinity College of Music where he added composition to his principal studies, and conducting for which he gained the ‘Ricordi’ prize and had the distinction of his compositions played at his graduating ceremony.

He initially taught music in schools but his love of performing and of theatre quickly took over and he began working as a repetiteur for opera and ballet and as conductor/ pianist in musical theatre in the West End and on tours around the UK.

This gained him a wealth of practical experience as a musical director with shows such as ‘Jesus Christ Superstar’, ‘Annie’, ‘Grease’, ‘West Side Story’ and a musical version of ‘The Hobbit’, this in turn led to composing for theatre and for miscellaneous instrumental groups. Music required would range from jazz scores (‘ Death of a Salesman’), to period drama with a Baroque score (‘The Hunchback of Notre Dame’), a more contemporary electronic score for a Shakespearean drama (‘The Tempest’) or adaptations such as ‘The Fifteen Streets’ set in the early 1900’s and ‘The Coventry Mystery Plays’ from the 14th Cent.

Eric met his wife Wen who was from Penang while he was on tour in the UK, and after some years they decided to relocate to Singapore where he soon immersed himself in South East Asian music particularly Chinese instruments and Gamelan, Indian music and later Korean ethnic music.

Since settling in Singapore in 1991 he has been active as composer, conductor, music technologist and educator. His experience embraces opera, musical theatre, film and television and he has written scores in many diverse and different genres including Electro-Acoustic music, Gamelan and Chinese Orchestra. In 2001 he was the composer and musical director for the Singapore National Day parade for which he conducted and recorded an orchestral score with the Singapore Symphony Orchestra and again in 2007 he wrote and arranged orchestral music for National Day this time with four different orchestras; the Singapore Symphony Orchestra, the Singapore Chinese Orchestra, a smaller Indian ensemble and a Malay ensemble.

In 2008 Eric Watson recently was awarded first prize in the first Singapore Chinese Orchestra International Composition Competition for his work, ‘Tapestries I – Time Dances’; and in 2011 and 2013 he wrote the first prize winning piece for the Singapore Piano and Violin competition, ‘Aftermath’ and ‘Nebulae’.

In his early years in Singapore wrote the musical, ‘A River In Time’, set in Singapore, in which he achieved a fusion of Western orchestra, gamelan and small Chinese orchestra, followed by second musical, ‘Land of A Thousand Dreams’. Numerous other works include ‘Singapura’, a set of orchestra variations based on the local melody of the same name; ‘The Wind’ for Symphonic Band and Chorus, a ‘Carnival’ for symphonic band, a ‘Concerto for Chinese Orchestra and Tabla’ and ‘Songs of the North’, a concerto grosso for Chinese orchestra, Fiddle, English Concertina, Pipa and Dizi , ‘Tapestries II – The Land Beneath the Wind’ for Chinese orchestra, many of these works were commissioned by the Maestro Tsung Yeh and the Singapore Chinese Orchestra. “The Golden Orb” for harp ensemble was commissioned by Katryna Tan for the Rave Harpers and in the same year a symphonic piece “Intersections” written for the ‘The Orchestra of the Musicmakers’ as well as and numerous chamber works for chinese as well as western instruments. Since 2011 he has also been one of the composers and conductors working with the Asean-Korea Traditional Orchestra, an ethnic orchestra consisting of folk musicians from all the Asean countries and Korea, helping to build a unique genre of repertoire and conducting the orchestra in Korea and the region.

In 2014 Eric was awarded the Kou Pao Kun award for Arts and Culture for New Immigrant which he celebrated by writing, ‘Constellations’ A Concerto Grosso for Symphony Orchestra and Chinese, Malay and Indian instruments, since then there have been many new works premiered locally and internationally.

Eric was composer in residence of the Singapore Chinese Orchestra from 2016 to 2018 in which two major works were composed ‘Nanyang Gate’ a concerto for Sanxian and Chinese orchestra and ‘As the River Flows’ a musical history of the Singapore River presented in concert with Straits Times archive photographs. His activities as performer, composer and lecturer take him to many parts of South East Asia, China, Japan, Australia and Europe. Publications include: ‘Grades 1 to 8 theory Workbooks’ and two volumes of piano arrangements ‘Main Stream & Standard Jazz’.

Eric Watson is currently an associate lecturer at the Singapore University of Social Sciences and in his pedagogical work he takes a special interest in teaching both classical and contemporary orchestration, conducting, composition, jazz and improvisational techniques. Throughout his professional life Eric has always taken a keen interest in teaching and mentoring either privately or in an institution having been head of music at LaSalle-Sia College of the Arts in t 1999 and later from 2004 senior lecturer then deputy Head at NAFA and is firmly of the opinion that practicing musicians have an obligation to pass on their knowledge and experience, he finds that this is of benefit to both teacher and student, and he also believes that study of the arts and music in particular is a necessary part of being a ‘whole’ person whether or not it is going to become a career and tries as much as possible to put this into practice with local symphonic wind and jazz ensembles and through teaching and nurturing young composers. In recent years his church activities have led him to conduct and compose anthems for amateur choirs and ensembles.

Eric Watson has written many ensemble music for Rave Harps Ensemble, music for the Musical “Pluck and the Magical Banyan Tree” and will be writing Solo Harp Concerto for String Orchestra, Dizi and Sheng this year in 2019.