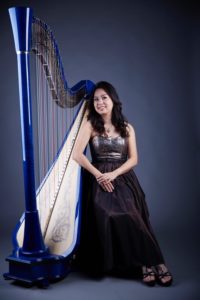 Katryna Tan, who was awarded the prestigious national Young Artist Award 2005 by the National Arts Council of Singapore holds a Masters of Music Degree in Harp Performance from the University of Michigan, USA. She is currently based in Singapore and Malaysia. Katryna held multiple roles in her harp career and her contributions has changed the landscape for harp in the region’s music scene tremendously. Just recently she was awarded the prestigious “Setiawan Tuanku Muhriz” (STM) title by the Ruler of Negeri Sembilan, Malaysia.

As a Harp Recitalist, Katryna has performed several recitals internationally and in the region. Katryna was invited by the New South Wales Harp Society to perform in the Government House (2004), performed in the Adelaide Harp Festival 2006, 2012 and her 2007 engagements include concerts in France and the States. She has also performed in Japan, Hong Kong and Macau. Katryna has appeared as guest soloists with the Singapore Chinese Orchestra, Singapore Armed Forces Band, Braddell Heights Symphony Orchestra to mention a few. She was also guest soloist with the renowned King’s College Choir from England and Dingyi Chinese Chamber Orchestra. Katryna has also performed with prestigious orchestras in the region including Singapore Symphony Orchestra, Malaysia Philharmonic Orchestra, Macau Orchestra and Evergreen Symphony Orchestra (Taiwan).

Katryna is a keen supporter of Asian and contemporary music. She regularly plays and commissions works by Asian composers. In addition, she also composes and arranges music for the harp. In a solo recital in 2005, Katryna premieres her own composition—“Water Dance”, inspired by an Ancient Chinese instrument guqin. Her latest works include “Jiang Jin Jiu” and “Sketches”. In 2007, she presented her works internationally in concert in Paris and in Washington under the Embassy Series. “Water Dance” was nominated in the category of Best Original Compositions in the 5th Cameronian Arts Awards in Malaysia. Katryna’s compositions has also been performed in the prestigious World Harp Congress 2011, Canada.

Besides Solo works, Katryna performs chamber music regularly with her trio group — I-Sis trio, a unique combination of harp, violin and cello. The trio has seen been recognized as a major contribution to the local chamber scene and has already performed internationally in Hong Kong, Thailand, Malaysia and recently aired on television. The trio was selected to represent Singapore in the 2011 World Harp Congress. Katryna also performs regularly with Singapore Symphony Orchestra Flutist Roberto Alvarez and other musicians.

Katryna is active as an educator, sharing her passion of music with other enthusiasts. In Singapore, she founded and has been directing Rave Harpers a harp ensemble in various performances since 2004. Her students have won numerous international harp competitions, been selected to perform in the World Harp Congress and have also been accepted in well-known music Conservatoires all over the world, including the Julliard(USA), Berklee(USA), Royal College of Music (UK) , Guildhall School of Music, England; Ecole Normale de Musique de Paris and most recently her 10 year old student was successful in entering the Purcell School (England) for the talented young. Under her direction, the Rave Harps Ensemble has been invited to perform internationally, most recently in France in the Ancenis International Harp Festival. She has also led the group to in the opening of CHILDAID 2011 (Singapore) and on TV in the opening item of the annual “President’s Charity Show 2013”.

Concurrently, Katryna is adjunct harp faculty in Singapore’s School of the Arts (SOTA) and Nanyang Girls’ High School. Since 2006, Katryna was Artistic Director to three Harp Festivals. In this bi-annual event, Katryna wore the hats of festival director, performer and directs the Young Harpist Concerts. Katryna is also one of the founding board of directors of Asian Harp Festival, the first one held in Hong Kong in Nov 2008. Gave Lectures in SIM (Singapore Institute of Management), La Salle School of Music and Arts. In 2008, she is appointed as Harp Director to Cempaka Schools in Malaysia, co-directs The Music Stage (Malaysia) and contributes to the Penang Island Harp Project.

Katryna has been invited to be Visiting Professor for Tasmania’s (Australia) Harp Island weekend in March 2014 and 2016. She is also Guest Master teacher in Indonesia in 2016.

Few might know that Katryna’s first degree is a Bachelor of Interior Architecture (Honours) from the University of New South Wales, Australia. She graduated with a Gold University Award for being the most outstanding graduate of the year. Perhaps it is this creative background that spurs her to her kaleidoscope of activities revolving around her music career. “PLUCK – The Harp Musical” Premiered in Nov 2012, is one of latest creative projects. A second musical “Pluck and the Magic Banyan Tree” was performed in 2015. In 2017, the Musical was invited to perform in Hong Kong @ the World Harp Congress.

Katryna also wrote a book “Unleash the Musician in You” sharing her teaching thoughts with music students.